Man vs Machine: COVID Solutions and Strategies That Are Here to Stay 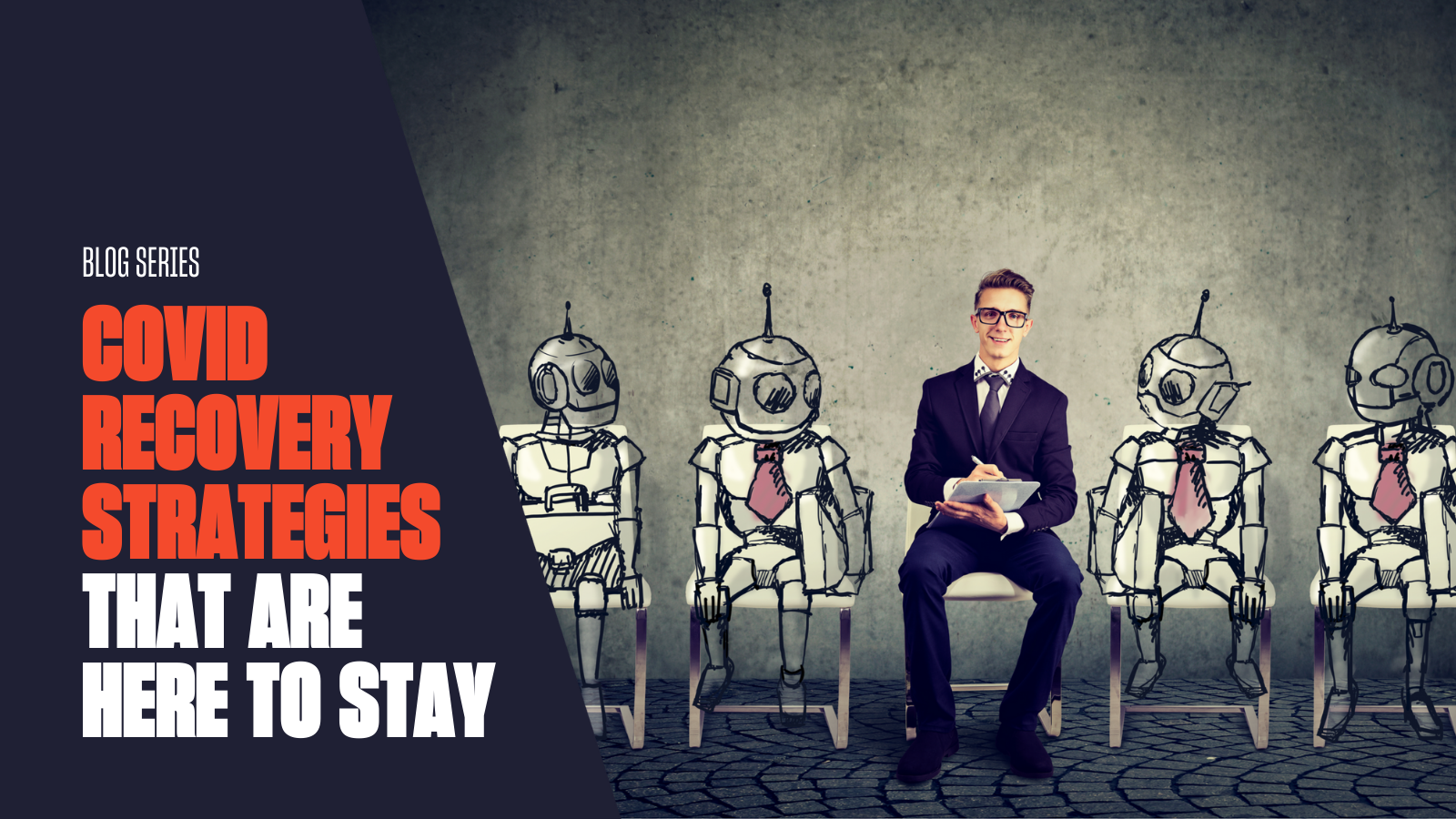 The staffing industry, like many others, has been affected in ways we’ve already experienced by this pandemic, and others that we aren’t aware of yet. According to Staffing Industry Analysts, Covid-19 is and will continue to be the dominant market trend until the second half of 2021.

Knowing that, let’s go ahead and dive into the second in a four part series on the trends, solutions, and strategies that were initially imagined as temporary fixes to the problems presented by COVID, but that have since proven themselves to be far more than simple Band-Aid solutions.

Here we’ll be taking a look at why the endless battle of man vs machine needn’t be a battle at all.

The accelerating march of progress

On April 24th, 1907, the streets of New York were left eerily dark, as the city’s lamplighters took strike action against the greatest ever threat to their profession: the lightbulb. Lamplighters in Belgium went a step further, smashing electric lamps wherever they were installed.

Over a century later, redundancy from automation is a fear that is being felt more acutely than ever. As technology becomes smarter, faster, and more effective, what role is there left for humans to play?

This is a question that the staffing industry met head on in 2020. COVID saw the office traded for the home, in-person chats traded for Zoom, and manual processes traded for automated. The already fast-turning wheel of progress was further accelerated by the pandemic, leaving many staffing professionals to wonder about their future.

But recruiters aren’t lamplighters - they can’t be replaced with an electric circuit. Tasked with building connections and relationships, staffing is one of the most human industries there is. As such technology simply isn’t capable of replacing recruiters, no matter how artificially intelligent it is.

It is, however, capable of making recruiters better.

Pre-COVID many staffing professionals felt that nothing could replace in-person communication. In many ways they were right; speaking to someone face-to-face is interaction in its purest form - something that we have spent millions of years evolving the ability to do.

But as the world began to lock down in 2020, face-to-face communication, whether in the office, the interview room or at a client’s site, was no longer an option. The likes of Zoom, Microsoft Teams, Google Meet, and Slack took its place. And it wasn’t so bad.

The key is that these platforms are doing all that they can to retain the humanity in communication. Video calls show body language, voice notes convey tone, even emojis and gifs in text-based conversations ensure messages are received as they were intended. And these technologies do all this while offering increased convenience, more effective collaboration, and the ability to instantly contact anyone anywhere.

When we are again granted the ability to move freely, there’s no doubt that face-to-face will remain the gold standard of communication. But you can expect far more virtual interactions than you would’ve pre-COVID, and the industry will be all the better for it.

Remote vs. Brick and Mortar

Lockdown also forced another major change. Remote work was thrust upon many industries, sweeping away long-standing resistance from both workers and employers in the process. Post-COVID, the question of remote work will have changed from ‘can we?’ - most organizations can - to ‘should we?’

While the joys of remote work were immediately obvious to many - the lack of commute, the creature comforts, the cost savings, the ability to set your own timetable - it soon became apparent that it wasn’t without its cons.

Humans are social creatures, so the water cooler chats and Friday night drinks have been missed by many. Others appreciate a clear delineation between personal and professional - it can be hard to get out of work mode when your office sits behind your couch. Others still found that work life was simply incompatible with home life - the distraction of kids, the lack of an appropriate workspace, and strained relationships were but a few symptoms of remote working incompatibility.

Post-COVID it will be up to each organization to find the balance between remote and in-office work, ideally offering either option to everyone possible. It’s not as simple as saying ‘everyone is now a remote worker’, as tempting as the savings on office overheads might be. But thanks to technology, we at least now have the option.

And so we come to our final tussle; the one faced by lamplighters all those years ago. Will technology replace humanity? In staffing at least, the answer is a firm no.

Whatever the case, it’s important to realize that these and other staffing automations aren’t about replacing humans. They are instead about dealing with the monotonous and laborious stuff, leaving recruiters to do the high value and human work that they enjoy, and were originally employed to do.

Take the email example mentioned above. You send out an automated message, cleverly personalized with a couple of custom fields, to 1000 talented individuals you lost contact with long ago. Even if just 1% write back, you have been delivered ten eager and engaged jobseekers who are ready for non-automated, distinctly human conversations. The staffing professional takes over as soon as the work becomes high value.

There’s probably an extensive list of automatable tasks that currently serve to decrease the efficiency and effectiveness of your firm. Technology is like arming every one of your recruiters with a suite of diligent assistants, allowing a team of 10 or 20 to do the work of 100 or more.

What does the technology-dominated future look like? It can be tempting to think of it in the dystopian, apocalyptic terms that make for A1 Hollywood blockbusters. But for staffing firms, the truth is likely to be less catastrophic. Technology will simply make the industry better.

This isn’t a tale of man vs machine, or lamplighter vs electric lightbulb. This isn’t an ending, it’s an opportunity. And thanks to COVID, it's one that innovative, agile, and forward-thinking firms are primed to make the most of right now.

Eager to learn more? Join us for part three of this four-part series, where we’ll be taking a closer look at the automation alluded to here, and how the logical next step - on-demand staffing - is set to totally transform the staffing industry.

You can also check out the first post on the power of video here.

How Should a Staffing Firm Approach Mandated Worker Vaccinations?